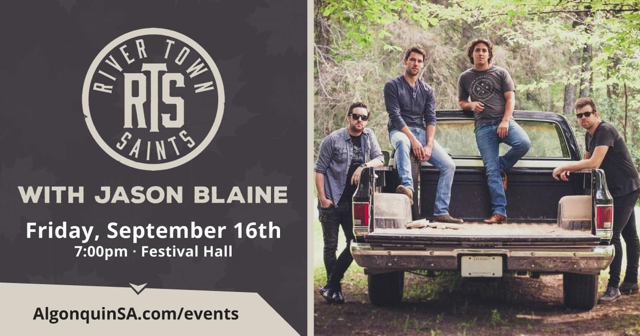 Come by Festival Hall for your orientation concert with Rivertown Saints and Jason Blaine!

The River Town Saints, originally a five-piece band from the Ottawa Valley, have earned a lot in recent years, including millions of YouTube views and Spotify streams, as well as a top 10 hit song with “Bonfire,” CMA nominations, and a Canadian Radio Music Awards. They’ve also toured with Tim Hicks, Kip Moore, and other country musicians.

Originally from Pembroke, Ontario, Jason Blaine was born to sing, write and entertain. His love for country music has taken him to the forefront of the Canadian music scene where he has remained for over a decade. With over 12 Top 10 singles in Canada including hits such as “Country Side” and “Friends of Mine”, he has also become a craftsmen of hits for other people including Chris Jansen, Parmalee, Petric and Madeline Merlo and others.

STAFF, STUDENTS AND ALUMNI ARE FREE. PLEASE STOP BY THE PEMBROKE SA OFFICE TO PICK UP.